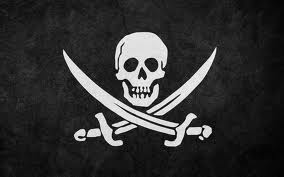 A Black Flag has been used for hundreds of years as a symbol for anarchy and/or the anarchist movement.  However, our black flag introduces another idea into the mix.   The Jolly Roger (sometimes a simple black flag, other times adorned with additional symbols, like our skull and crossed swords) was the first flag displayed by pirate crews when attacking another ship.  The flag indicated to the crew of the other ship that their lives would be spared if they would surrender.  While there were surely some horrible men amongst pirates, most pirate crews were made up of men who were running from extremely oppressive societies, quite often the brutal English Navy.

At Curmudgeons.net, it is this very attitude of rebellion against illegitimate and oppressive authorities that we seek to promote.  The Black Flag of Freedom is awarded to men and women who have suffered in the hands of such authorities for doing nothing but exercising their God-given freedom.  Extra consideration is given when the honoree has knowingly rebelled against oppression.