Remember How We Were All Supposed To Be Scared Of The Chinese Government And Huawei Spying On Us?

Last October I wrote about how the U.S. House of Representatives’ Permanent Select Committee on Intelligence warned American companies not to do business with the Chinese telecom equipment manufacturer Huawei.

The supposed “threat” was that the Chinese government had co-opted Huawei into inserting spyware directly into the hardware of its products in order to extract information and send it back to China.  Nevermind that virtually all components of “American-made” telecom equipment are also manufactured in China.

That committee was, and is, led by Chairman Mike Rogers and Ranking Member Dutch Ruppersberger.  These are the same people who issued a statement from their committee on July 23rd, the day before a vote on Rep. Justin Amash’s amendment to the Defense Appropriations bill, urging support for an “Important NSA Counterterrorism Tool”.

They referred to the NSA’s PRISM and XKeyscore programs as “valuable collection tool[s]” and engaged in a bit of fear-mongering by stating that any restrictions on FISA would “make America more vulnerable to terrorist attacks”.

Mike Rogers represents Michigan’s 8th district.  He was an officer in the US Army in the late 1980s and then worked as an FBI agent until he was first elected to Congress in 1994.  His wife is the former president and CEO of a State Department intelligence contractor, Aegis LLC. 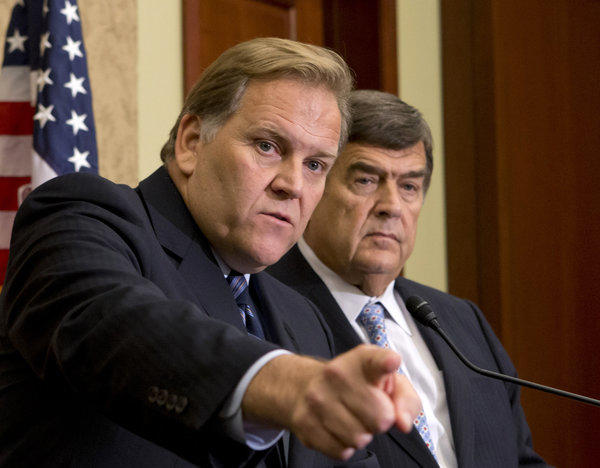 Dutch Ruppersberger represents Maryland’s 2nd district, which includes four counties and Baltimore city, collectively home to the NSA at Fort Meade, the US Cyber Command, and Aberdeen Proving Ground, the latter two as intricately tied to the US intelligence community as is the NSA.

While I questioned the efficacy of Amash’s amendment, legislation designed to partially defund the NSA’s spying with the use of FISA court orders, the point remains.  Rogers and Ruppersberger are shills for the American espionage state and their committee is designed for shielding, not oversight, of US intelligence agencies.

Yesterday I received an email with this article about how Huawei has fared since the committee issued their warning.  It jogged my memory and prompted me to write this post.  Unfortunately, CRN dodged the whole issue and nowhere in the article does it reference the NSA or any of the information revealed by Edward Snowden about their domestic spying programs.

Remember that while Snowden was collecting evidence, and Rogers and Ruppersberger were trotting out the Huawei bogeymen who supposedly would steal all of our secrets and personal information, the US government, via the NSA, was doing exactly that.

We know now, thanks to Snowden, that the NSA engages in spyware and malware creation to infiltrate computer systems.  The Stuxnet virus is a prime example, but in the case of their domestic spying they took a more direct approach.

Rather than using spyware embedded in the telecom carrier’s hardware, the NSA simply demanded that ISPs, mail hosting platforms, and telephone companies provide data feeds directly to them.

Who needs spyware when you can get it directly from the source?

The recent shuttering of Lavabit and Silent Circle’s Silent Mail service further proves Jim Lewis to be a liar and also a shill.  In my previous post, I quoted Lewis of the Center for Strategic and International Studies:

Here [in the United States], companies are used to, you know, throwing their weight around and telling the government what to do. In China, a company is a Chia pet. The state tells them what to do, and they do it.

In light of all we suspected about the NSA then and now know for sure, this is a totally ludicrous assertion.  Even the 60 minutes report from last year exposed the intimidation, if not outright threatening, of United Wireless president and GM, Craig Mock by some federal agency for even thinking of buying Huawei equipment.  Mock declined to say who exactly had visited him to deliver the dictum.

Sounds eerily similar to Lavabit, no?

Of course the Chinese do engage in industrial and state espionage.  Unlike the eastern Europeans who are simply looking for credit card numbers to make a quick buck, the Chinese are looking for trade secrets and ways to gain an edge on US companies and the US government.  They are not, however, bothering themselves with who you or I called, emailed, chatted, Skyped, or texted last week.

They also, to my knowledge, do not label Americans as terrorists, put them on secret lists, sign secret death warrants without trial, and then drone murder said persons in secret, killing their minor children and dozens of other innocent people in the process.

I originally posited that the warning about Huawei was merely protectionism for American telecom companies, specifically Cisco Systems.  That was probably the case, but in hindsight, perhaps it was also a bit of professional rivalry and a bit of dissembling and diversion.  The NSA may have simply been trying to keep the Chinese out of their sandbox.  Or perhaps the NSA already has spyware embedded into American telecom equipment and feared losing access or having to tip their hand should it be replaced by Huawei.

In any case, the moral of the story is the same: whatever the US government cries foul about some other government doing, be doubly suspicious that they are already doing it themselves.

After all, it takes one to know one.

2 comments on “Remember How We Were All Supposed To Be Scared Of The Chinese Government And Huawei Spying On Us?”